Posted by randomkindnessblog on October 14, 2014
Posted in: language tutor. Leave a comment

Thanks to the kindness of the Suzhou Education Board, I have been able to visit the small city of Suzhou over several summers.

Suzhou  is a major city in the southeast of Jiangsu Province in Eastern China, adjacent to Shanghai Municipality, according to Wikipedia.  ”

It is the economical, trading and logistics center of Jiangsu, and the second largest city in the province after its capital Nanjing. The city is situated on the lower reaches of the Yangtze River and the shores of Lake Tai and belongs to the Yangtze River Delta region. Administratively, Suzhou is a prefecture-level city with an urban population of over 5.4 million in its core districts. Suzhou is the ninth most populous city in mainland China, and the total population exceeded 10 million in its administrative area in 2010.[4] It is considered one of the richest major cities in China.

I have skimmed some of the hundred of photographs taken during my visits and present a random sample of 30 to represent the character of the city:

The old and the new – mopeds and the trishaw

The large dog is waiting in its small cage for a buyer. The street is lined with businesses selling [pets and offering pet grooming services

Is the monk talking with family or giving advice to a young couple or are they just friends having lunch?

Houses crowd the calm of a Suzhou canal

A barber operates in a small city park

Relaxing in the shade of a cool garden

“Watcha haerd” sing the boat lady as she sculls under a low canal bridge.

A red and muted sun sinks in the west.

Construction cranes frame the pagoda tower of the southern temple

Garbed against irritating dust and fumes, a commuter weaves through traffic

Three men play cards outside a market shoe stall while a fourth man watches for customers.

A smile for the camera from his sisters back

Big Nosed foreigners are a curiosity for these two children, proudly displayed by their mother. 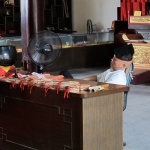 A temple priest dozes during the hot afternoon

a motorbike is serviced where perhaps the light is bright and natural, on the footpath.